How To Choose The Right Selector For Web Scraping: XPath vs CSS

If you're fresh-new to web scraping, you may not be familiar with selectors yet. Let us introduce ya – selectors are objects that find and return web items on a page. These pieces are an essential part of a scraper, as they affect your tests' outcome, efficiency, and speed.

Yep, understanding the idea of a selector isn't that complicated. Finding the right selector itself might be. To be honest, even the two languages that define them, XPath and CSS, have their own pros and cons. So it can quickly become a headache to choose one of them. But here's some good news – we're here to help! Let's explore it together. 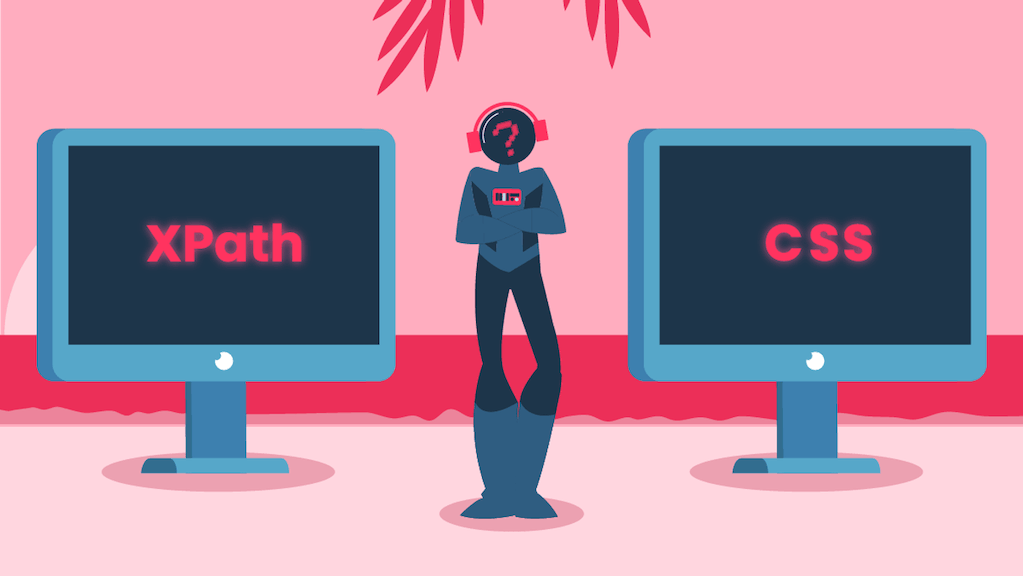 What is an XPath selector?

XPath means XML Path. In essence, it’s a query language that uses non-XML syntax to make it easy for you to identify elements in XML documents.

You may have already tried to guess if there’s a meaning behind XML Path’s name. The answer is… yes! The selector uses expressions so that they can be traced from the start of the document to the intended element. BINGO – that seems like forming a path.

XPath might be your best buddy in plenty of contexts – it’s applicable to provide links to nodes, search repositories, and many other applications. There are two ways to create an XPath:

An absolute XPath starts with the / symbol. It’s usually quite long and hard to maintain.

It has a complete path, beginning from the root to the element that you wanna identify. It’s worth mentioning, however, that if there’s any change in attributes starting from the root, the absolute XPath will become invalid. You need to watch out.

A relative XPath starts with the // symbols. It’s shorter than the absolute XPath.

It begins by referring to the element you wanna identify, not from the root node. If you remove or add the element, you won’t affect the relative XPath. That is why it works well with automation.

Let’s take a look at a basic format of XPath (this one is the relative one, tho!) and try to understand its syntax:

This is what it means:

XPath has some dope features to offer. It allows navigating up the DOM when lookin’ for elements to scrape. If you don’t know the name of an element, you don’t have to sweat – you can use contains to search for possible matches. Oh, and by the way – XPath slaps even when scraping with old browsers, including ancient versions of Internet Explorer.

Nothing is perfect. XPath isn’t an exception. The biggest con of it is being easily-breakable. XPath is also slow, and its complexity can make it hard to read. 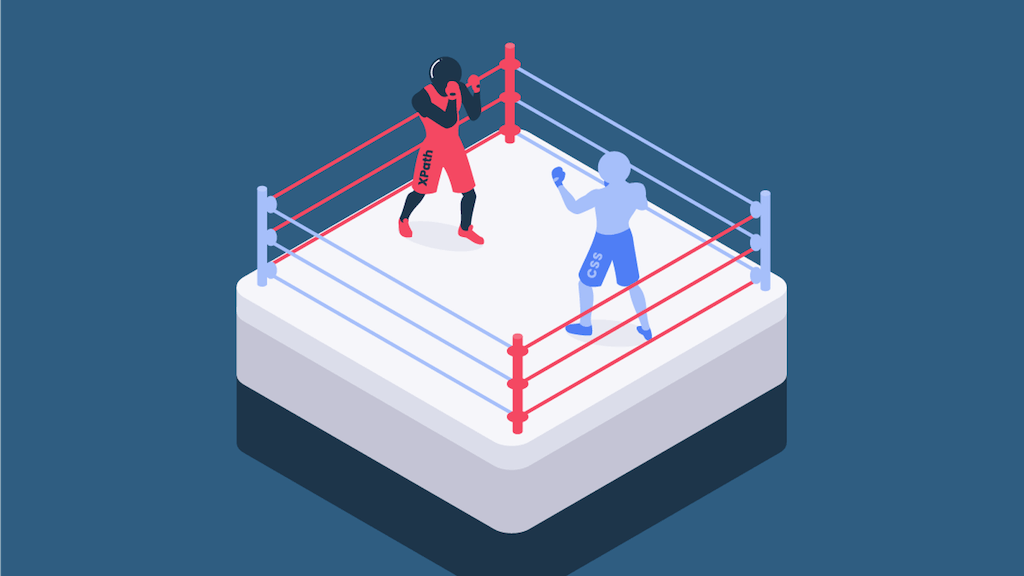 What is a CSS selector?

In a nutshell, CSS stands for Cascading Style Sheets – a text-based language. It allows you to control various style elements, functionalities, and the formatting and display of HTML docs. So, thanks to CSS, you can choose the color or the font of the text, the spacing between paragraphs, the column sizes, and much more.

When identifying the various elements on the page based on styles, you select the class it falls into. CSS lets you pick out the type of content to test, edit, and copy. In other words, selectors help you target the HTML elements you wanna style.

CSS selectors come in several types and have actual names and categories:

These selectors pick up elements based on their class or ID. They include only one element in the structure.

Attribute selectors search for elements based on the values assigned to them. These have symbols or spaces to separate elements.

You choose pseudo selectors when the states of elements are declared with CSS. They use keywords that you add to select a specific part or state of the element.

CSS may be your go-to selector for various reasons. First of all, you can use CSS on the development side. It’s also compatible with most browsers. Finally, with CSS, you have a high chance to find the elements you want.

As there are so many levels of CSS, it can create confusion among web browser developers and beginners.

Nodes and relationships: XPath and CSS

Here’s the thing: you can really start web scraping without having a basic knowledge about it. So, fasten your seatbelt, and let’s learn the beginner terminology for both – XPath and CSS.

Let’s start with an example:

Nodes represent entities of a domain. Every XML or HTML has three types of nodes:

There are more types of nodes, such as entity nodes, CDATA section nodes, document nodes, and others. All of these nodes can have different kinds of relationships with each other. Every relationship must have exactly one relationship type.

Yeah, we got familiar with both of the selectors, but wait! Before jumping to conclusions on which one to choose, let’s compare them. 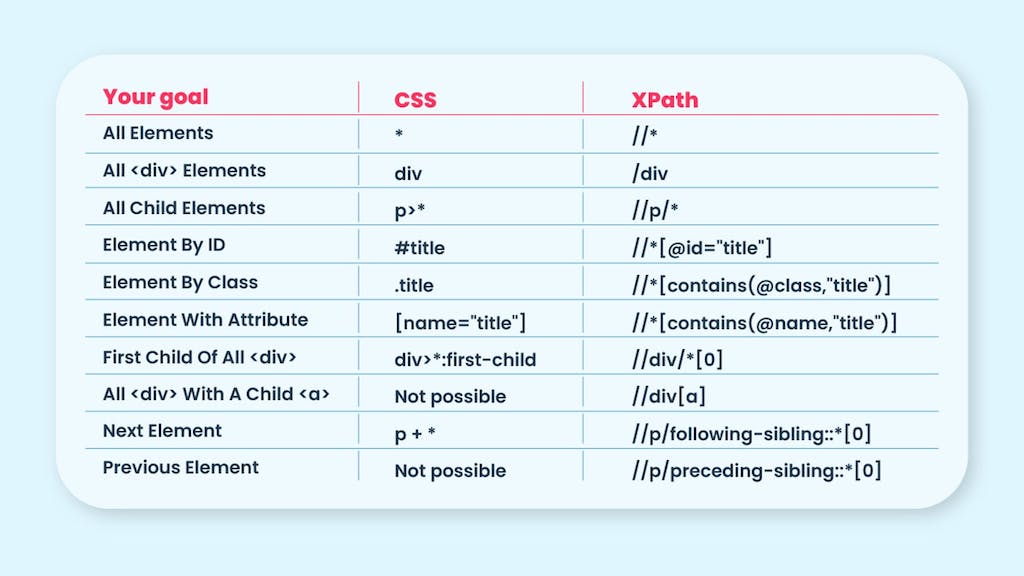 It’s finally the time to choose your character! While web scraping, we’d suggest not focusing on one or a couple of benefits too much. Your choice should depend on your situation and factors, including finding the required feature-set or compatibility. So, try to see the complete picture and explore both options yourself.

While using web scraping tools, such as Beautiful Soup, consider the find and find_all methods. They’re optimized for Beautiful Soup – it means there’s no need to worry about choosing between two selectors.

Choosing the right selector may be difficult but surely important when web scraping. For publicly accessible data gathering, you also need suitable tools for that. For Google’s SERP results, pick our full-stack SERP Scraping API. We also have eCommerce and Web Scraping APIs if your targets are not limited only by search engines. All our APIs deliver results at a 100% success rate and are armed by our elite proxies for your ultimate data gathering experience.

In case you already have your scraping proxies, scale your project by increasing speed and IP stability with datacenter proxies. And go for residential proxies for unblocking data in any location and scraping the websites that are extra sensitive to automated activity.

What is web scraping for?

Web scraping allows you to gather publicly accessible data. To find out about some most common cases, you can check our blog post or watch a YouTube video about web scraping projects.

What web scraping tool should I choose?

It depends on the nature of the target and how complex it is. The most common ways are to build a data scraping tool yourself, use pre-made web scraping tools like Scraping API, or try no-code solutions like the No-Code Scraper.

Scraping APIs usually differ by their targets and unique technical aspects. If you're developing your eCommerce gig and want to be all eyes and ears on your competitors' behavior in real-time, your top choice could be eCommerce Scraping API. If you're doing large-scale research and rely on search engine data, the most logical way would be to go for SERP Scraping API. And if you're gathering data from websites having a solid anti-bot system but don’t have any desire to deal with CAPTCHAs, better rely on Web Scraping API. AND if you have no coding experience but still are eager to scrape that data, grab our No-Code Scraper.

Not sure which tool could be your one and only? Try one of these three days for free, test how it works yourself, and then decide if it's what you want. 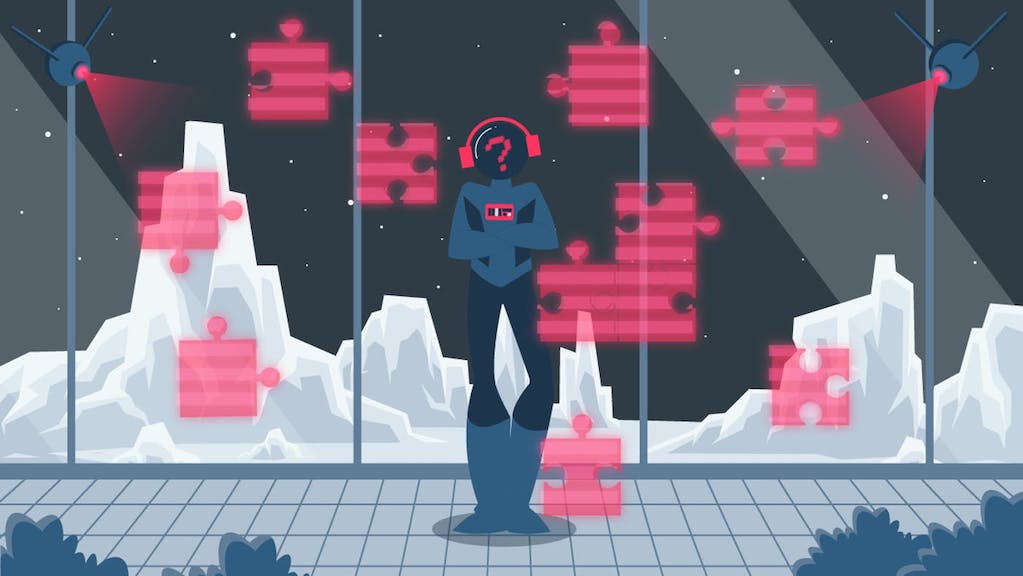 Digesting parsing: what is parsing? [VIDEO]

Just like we translate natural languages to have efficient international communication, we need to perform similar processes with programmin... 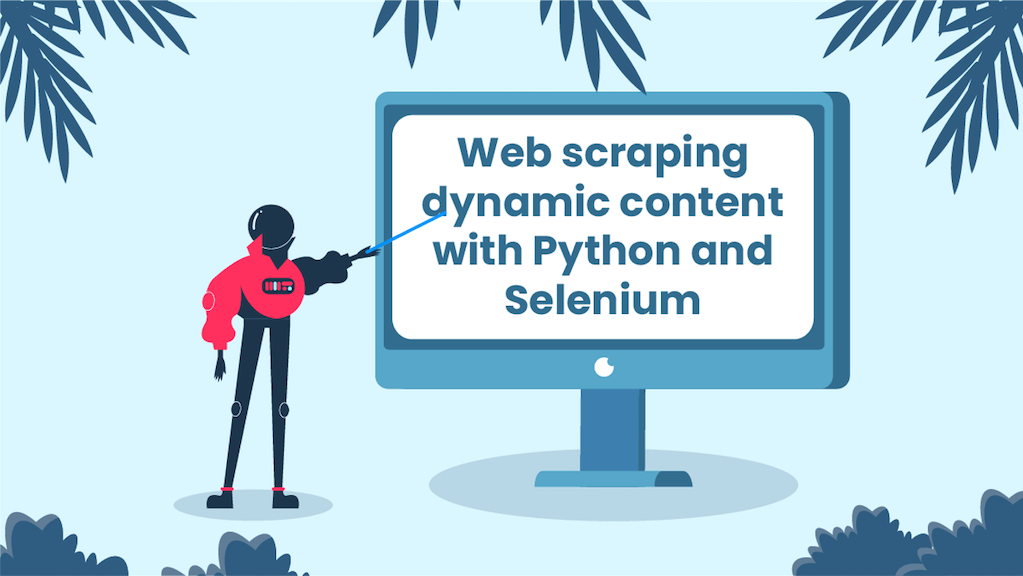 The internet has changed quite a bit, hasn't it? Today, almost every popular website you go to is tailored to your specific needs. The goal ...