What’s The Difference Between IPV4 and IPV6?

An IP address is an essential part of communication between devices and networks. Sure, it carries certain information about us, which can become a target for hackers and cybercriminals alike. But without an IP we wouldn’t be able to access the internet. And here’s the kicker – we’ve run out of IPs.

For this reason, a new version, IPv6, was created. But why haven’t we all upgraded to the newest IP version yet? What do we even know about it in the first place? We will dig deeper into these questions by comparing the two current IP versions – IPv4 and IPv6. 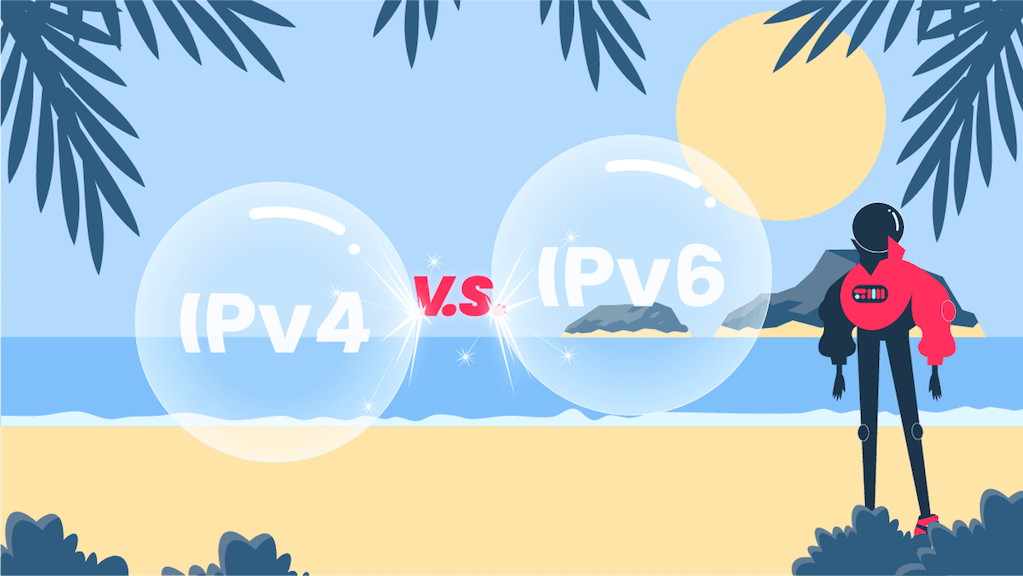 An IP (Internet Protocol) address is a set of numbers (or numbers and letters) provided by your ISP (Internet Service Provider) and assigned to any device. It allows devices to communicate with other devices and networks. Without an IP address, it wouldn’t be possible to connect to anything online.

It’s kind of like a passport or an ID card – everyone has to have it if they want to travel and move across countries or even jobs. The company has to make sure that you’re an actual employee and not just some random person snooping around.

A bit of history

The IPV4 (Internet Protocol version 4) was created in the 1980s. This 40-year-old version accounts for over 4 billion IP addresses today. When first introduced, it really seemed like this amount would supply users for a long time. But as the popularity and accessibility to the internet grew, the need for more IP addresses inevitably increased.

So why are we still using IPV4 IPs? There are many reasons for the delay in change, one of the main ones being that it takes great effort, time, and money to update everyone to IPv6. Since IPv4 was around for so long, it accounts for over 90% of the world’s internet traffic today.

Quite frankly, staying with IPv4 is a cheaper, more efficient, and even safer option. Compared to IPv6, the IPv4 has been tested, monitored, and updated for a long time, while the IPv6 is still relatively new. Undoubtedly, this is the version of the future, but there are simply too many devices that don’t support IPv6. Long story short, as Rome wasn’t built in a day, so won’t the change to IPv6 happen in a day either.

In a nutshell, IPv4 and IPv6 are both versions of the same IP address. For the most part, it’s essentially the same thing, but at the same time – some key differences make IPv6 stand out from the crowd. Let’s see what the new IP version brings to the table.

IPv4 is a 32-bit system that uses a string of numbers that are separated by periods – a numerical dot-decimal notation. 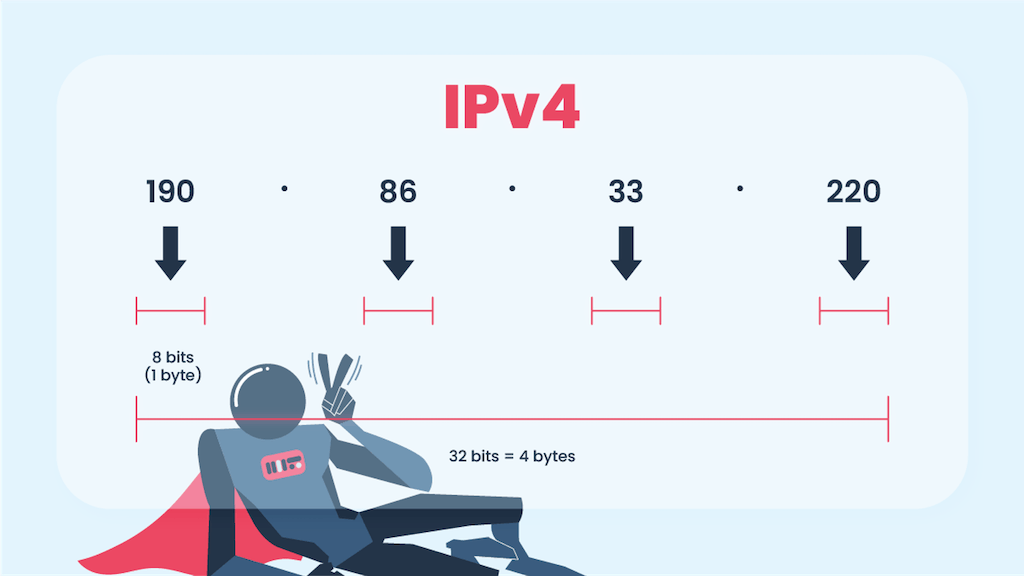 IPv6 is a 128-bit system that consists of both numbers and letters – an alphanumeric hexadecimal notation. Unlike the IPv4, the IPv6 is separated by colons. 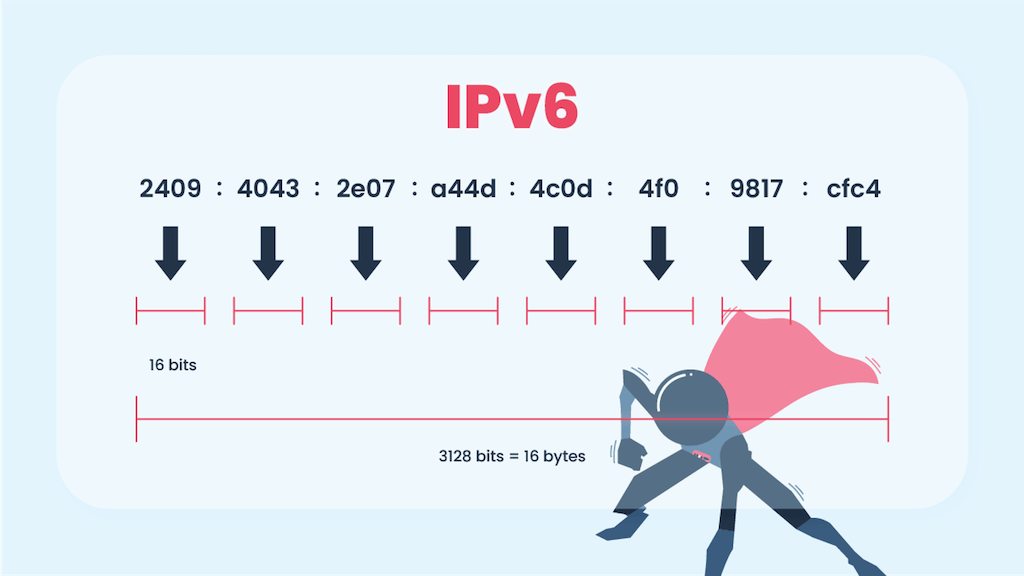 Okay, so IPv4 and IPV6 look different and have a dramatically different capacity for IPs. But this is only the beginning of a real rabbit hole. Let’s look over some other important key factors when comparing the two versions.

IPv4 has around 4.3 billion IP addresses stashed in its closet. And we’ve run out of all of them – a little funny, isn’t it, considering the amount? But as more and more people are connecting to the internet every day, it’s not hard to imagine that the 4.3 billion limit would be reached pretty quickly.

IPv6, on the other hand, has over 340 trillion trillion trillion IPs. Still, it’s estimated that one day that won’t be enough – we can’t stop the unrelenting technological advancement after all. For now, though, it’s safe to say that we won’t have to worry about running out of IPs anytime soon.

The 6th version has an integrated secure network protocol suite called IPSec (Internet Protocol Security) that allows end-to-end encryption and authentication. This way, communication between devices on a network is safer, and we have one less thing to worry about.

Security was not something that was considered when IPv4 was initially designed, but since  IPv4 has been updated throughout the years, it now also supports IPSec. The only difference between IPv4 and IPv6 is that the latter already has this security feature.

It’s important to note that when comparing the security of IPv4 and IPv6, the difference isn’t that significant. The main reason is that even though IPv6 has IPSec, it’s still a new player in a completely new game. It basically means IPv6 is more susceptible to various cyber-attacks. So at least for the time being, having IPv4 is safer.

In theory, the IPv6 should be faster than IPv4 because it allows devices to communicate with each other without NAT (network address translation – a way to conserve IPs by giving multiple addresses a single public IP) getting in the way.

However, multiple tests have shown that both IPv4 and IPv6 are equal in terms of speed. Some tests have even shown that IPv4 is slightly faster than IPv6. Not to sound like a broken record, but the reason is the same – IPv6 is just way too new, while IPv4 has been updated, analyzed, and reviewed multiple times.

Compatibility with VPNs and proxies

If you’ve found yourself reading this blog post, chances are that you might already have IPv6 together with IPv4. It depends entirely on your ISP – some provide their users with both versions, but other ISPs don’t. So, if you’re the lucky one, do VPNs and proxies work for you?

The short answer – most VPN services don’t support IPv6. It means that if you have both versions active, only the IPv4 is masked, but the IPv6 isn’t. Your VPN becomes useless because your actual location can be found through your unmasked IPv6. But don’t start sweatin’ just yet!

To avoid this, you can simply disable your IPv6 in your system’s network settings. Another way to combat this is to get a VPN that supports IPv6. Also, some VPNs that don’t support the new IP version, provide a service called IPv6 leak protection. As they say, when there’s a will, there’s a way!

As for proxies, well, once again, it depends on service providers. Smartproxy is one of them –  we support both IPv4 and IPv6. Check us out if you’re in the market for some good-quality proxies.

However, it’s also important to note that most websites don’t even support IPv6 yet. You’d still need to disable it if you want to start scraping, gold-digging in sneakers’ sites, or automating your social media business. So even if a proxy supports IPv6, you won’t get much out of it just yet.

What a ride, huh? Honestly, there is no clear answer as to which is better – IPv4 or IPv6. At least for now. Both versions sport some neat features, and as it stands now, you could even argue that IPv4 is better simply because most of today’s devices operate on it.

Not to mention the fact that IPv4 has been around for over 40 years! You can imagine how much work has been done to improve this version. On the flip side, though – IPv4 days are literally numbered. We’ve run out of IPs, and the change to the newer IPv6 is inevitable. Sure it will take some time, but that future is not far ahead! 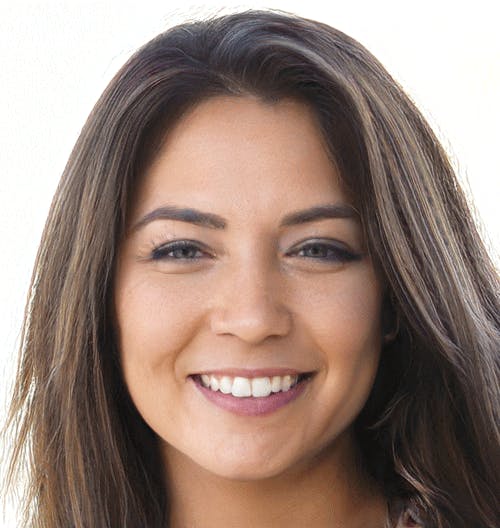 Say hello to Mariam! She is very tech savvy - and wants you to be too. She has a lot of intel on residential proxy providers, and uses this knowledge to help you have a clear view of what is really worth your attention.

What can my IP address show about me?

An IP address can show your general location – your ISP’s name, country, city, ZIP code, and sometimes even your street address. It’s a price we have to pay to be recognized by the network we want to connect to.

Sadly, when we put this information out into the world, malicious individuals or groups can take advantage of that information and later use it against us. You can read more about this in our blog post where we talk quite extensively about what can someone do with your IP.

Can I have both IPv4 and IPv6 at the same time?

Yup! It depends on your ISP though, some provide both IPv4 and IPv6, while others don’t. If you want to check whether you have IPv6, probably the easiest and fastest way to do that is to go to https://ipv6-test.com/.

How do I check my IP address?

You could go to your computer settings, then navigate to…oh, but that’s too complicated.  You can instantly know your IP by heading over to our website! There you’ll see your IP address, your ISP, OS, and other details by simply clicking on the link.

Why is there no IPv5?

IPv5 was never a thing. It was more of a testing protocol in an attempt to create the IPv6. IPv5 started with the same 32-bit system. Since the IPv4 has the same one, the idea of IPv5 was discarded pretty quickly as it would’ve faced the same problems as IPv4. I know, not very exciting.

Can I change from IPv4 to IPv6?

If you have both versions, then yes, absolutely – you can enable IPv6 whenever you want. You might have to contact your ISP first, but if you’re using Windows 10, all you’d have to do is go to the Network and Sharing Center and check the Internet Protocol Version 6 (TCP/IPv6) box.

For Mac users, you’d have to go to System Preferences, click on Network and then select the connection type. Select Advanced, confirm Configure IPv6 is set to Automatically, and then press OK.